It was a really politically tense year. "OCCUPY" was the word and people were doing just that, sitting and taking a stand against the political machine that leaves them very little else to do to change things other than just sit down and pitch a tent! Although their message was blurred and twisted in the media they spoke to me and I saw what I saw during the Vietnam era... a non violent peaceful protest for change, for a while it was encouraging. But, after a while camping isn't protesting and without a clear spokesman and the opportunity to hear one... might as well back up your sleeping bag and go home. I'm not one to sit with a crowd in protest these days, not my style... but If I have a stage a projector and a screen I can damn well make my own statement!

That is what the "2012 DSoOz Fest" was all about, railing against the media 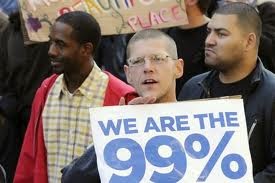 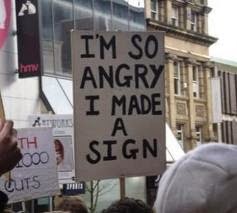 I told myself If I was going to do another DSoOz I had to do something spectacular. I decided to totally re-invent DSoOz again, this time twist it to incorporate 2 complete Ozzy Osbourne songs "No More Tears" and "Thunder Under Ground" into the movie itself. It seemed crazy to me at first and then I thought, well actually "Crazy" is perfect! But I can't be crazy, I'm The Professor, I'm the one who is suppose to be in control here. What I need is a good nemesis like Batman had in the Joker, one that can take the blame away from me for any opinions that might challenge the audiences perception of my real point. At least be the bad guy if need be but, he was pretending to be me! The story goes:

As I said at my previous DSoOz, this may be the last and after saying that I decided to take that suggestion and relinquish the authority to someone else. Since The Professor had now left the country in search of curious synchronistic events and left no forwarding address... It seemed the perfect opportunity to take the stage myself as Oz Ozborn and pitch a tent in the name of a creative political statement. The character looked quite a lot like Ozzy... the darker it got the better I looked! I had a great straight black wig, round glasses, black jacket, jewelry and all I really had to do was mumble. I even went to the extent to create another facebook identity under his name just so he could pop up and torment everyone with his critical thought!

My Intro to Oz, which is the 1st 30 min of my show before the actual DSoOz screening, was more of a comical satire on the state of the state. It included a short bit by George Carlin that emphasized my point quite well and of course it had lots of Ozzy Osbourn jokes just to kick his character around and prepare you for his entrances in the DSoOz sync itself!

Dead center stage for 2 days and nights! I cut a hole out of the back of the tent, secured the rear curtain so no one could see you come and go and made the steadfast rule that at show time, no one comes and goes on or off of the stage except through the tent door! The tent had some unusual features itself, I had shrunk The Professors Wayback Machine down to something more tent size this time and loaded it up with the same old school effects. I had to make sure that I left room in the tent for not only me to wait for my 1st appearance to exit as Oz Ozborn in the very beginning of the show but also have people pass through the tent themselves at the end of the evening to collect their diploma's. 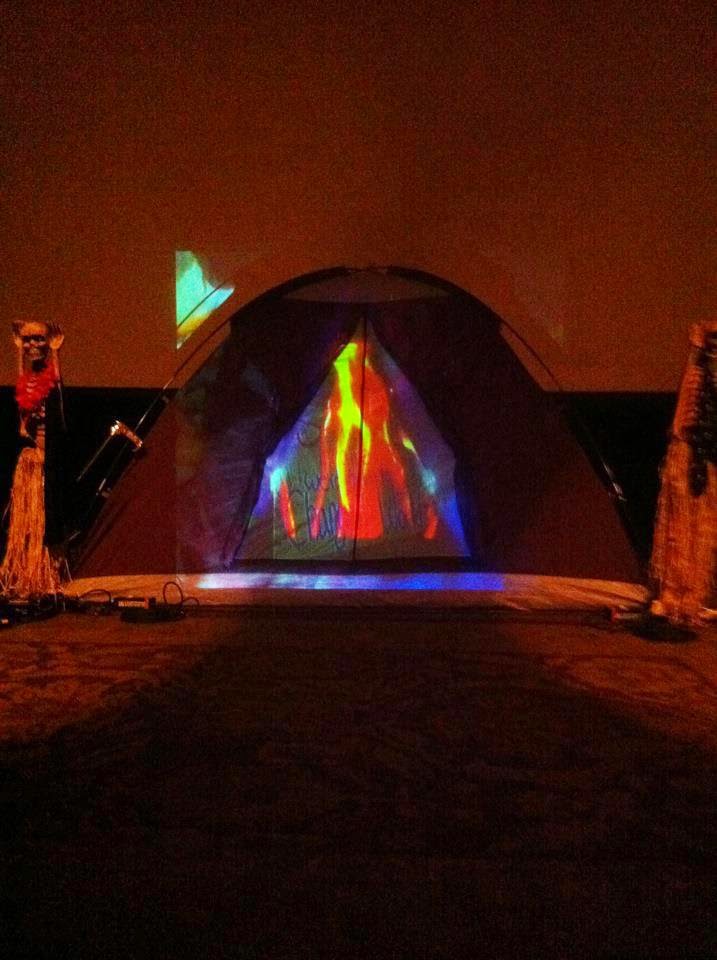 To dramatize Oz's exit out of the tent I needed a special effect and once that I realized that the zip up bug screen triangle made the perfect projection screen I was on the right track. I used a 2nd projector to project a triangle cut visual that hit only on the triangle bug screen. With the house projector hitting the main 30'x40' screen and the effect opening of the tent made quite a statement! At show time I started the DVD intro and secretly made my way through the back stage and into the rear of the tent to wait for my exit cue (stumble out was the plan) . Inside the tent was a crazy environment of spinning wheels, colored lights and lots of fog... leaving me little choice in that tent but to light-up a special celebratory joint and play with some hand palm lights that I was wearing for the personal effect. I wish I had photos of this exit, it seems out of 3 or 4 photographers that were there they were all caught off guard... I've been told it was quite a sight to see! I'm not surprised either, I spent a lot of time editing 2 separate videos that I actually hand synced together live to create the effect. In a cloud of fog, through lightning bolts of color, fire and sound what a fine tribute to the man himself... As I opened the tent flaps and stepped out to begin the show, it was truly one of the most surreal moments of my life. I stumbled out of the tent and mumbled appropriately what little lines I had given myself and guided the audience towards that red brick road which is always best place to start. 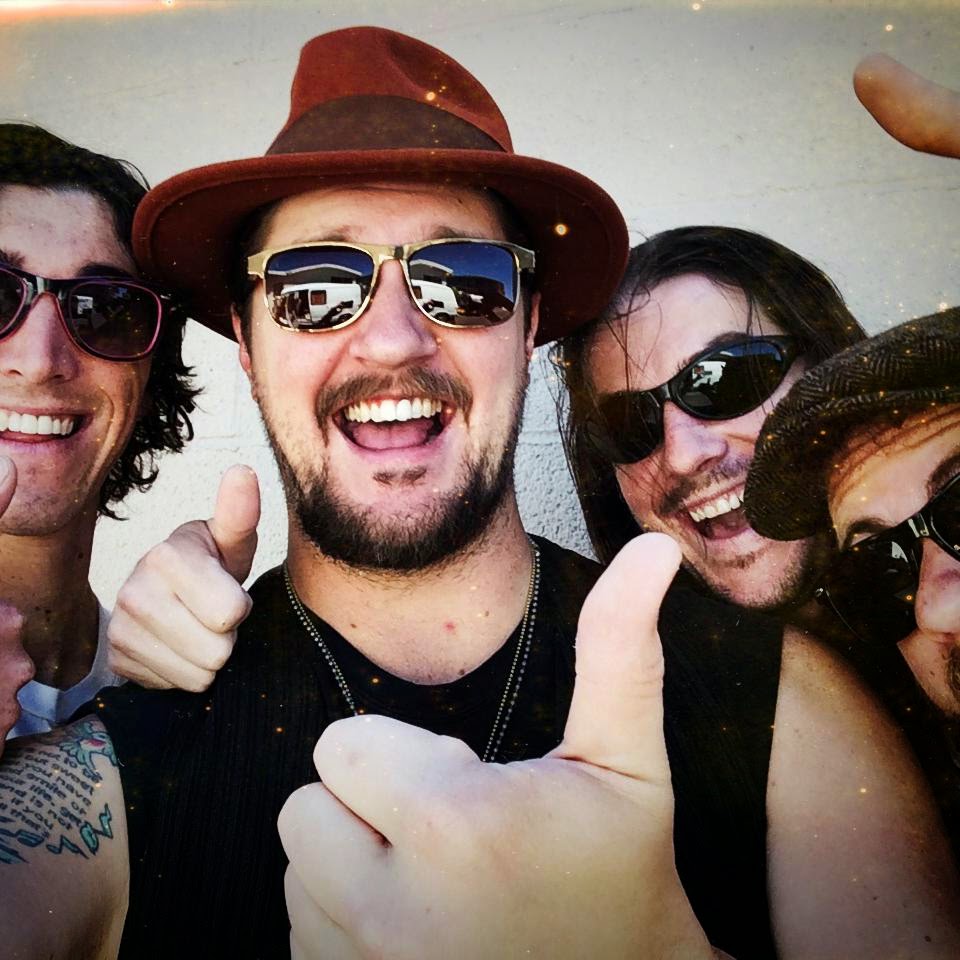 The Highway Poets - We Represent
THE HIGHWAY POETS facebook

I brought some friends along with on this journey once again. "The Highway Poets" joined me on stage as "The Lollipop Poets" during the intermission and brought down the house with a rousing acoustic rendition of "The Lollipop Guild" delivered in a very unusual way!  As I mentioned, any one coming or going from the stage had to enter and exit through the tent so when it came time to introduce my special little friends I just began by stumbling around the stage lining up 5 pairs of shoes in a straight line (which was difficult for Oz Ozborn) directly in front of the tent door. As I introduced them they began to file out single file on their knees and placed each of their knees in the appropriate pair of shoes. But, the fun didn't stop there. I had prepared 5 helium balloons side stage and wielding a sharp pair of scissors I sniped the end off of each balloon as I handed it to the respective Munchkin. On the count of 5 they were off... each member inhaled the helium and began to sing. I can't tell you what a funny trick it is to play on already exceptional vocalists, than to pitch shift their vocals up 2-3 octaves and then ask them to sing in tune and play a song. It was truly hilarious and quite impossible!

All in all I felt like I had blown up the mother of all syncs for good, no other music was used in Oz Fest other than Pink Floyd and Ozzy Osbourn. "Thunder Underground" was used just as Dorothy is leaving Professor Marval's trailer just before the twister hits and "No More Tears" represents Dorothy's struggle and the fact that the Witches Castle is the Dark Side of the Moon! There's no going back from here and very little elsewhere to go I thought to myself... I might be done... but as twisted as it may sound it was really quite spectacular feat and carried a strong personal statement that I could never of made by just pitching my tent in Down Town Santa Rosa.