After working at The Mystic Theatre for about 5 years I realized that I should be getting more for my self personally out of the theater than just live mixing, recording and staging the shows. With the access to a 30' x 50' theater screen and a decent Panasonic LCD projector, There aren't a lot of spiffs in my business, a few free drinks, maybe a pie, so It seemed only right that at some point I should want to use the theater for one of my own experiments and productions.

After 2 years of casually showing the original hand spun "Dark Side of The Rainbow" (DSoTR) sync in the theater, I found that I wanted more from this amazing synchronistic display. It seemed to me that after watching it for more times than I can recall, I could emphasize and even enhance some of the more exaggerated elements of the grand sync by delicately adding parts of the dialog and even a few of the more spectacular Oz audio effects! And so the long process began...

I started by ripping an original MGM re-mastered DVD version of "The Wizard of Oz" (TWoOZ) and placing it in my DELL computer running Sony's Vegas Premier HD and DVD Architect software. Then I loaded and ripped a newly re-mastered Pink Floyd's "Dark Side of the Moon" (DSoTM) album and placed it along side it's new counterpart. I now had the ability to manipulate both subject matters to enhance the effects that I was looking for. I had a good frame of reference because of all the viewing of the original DSoTR that I had done, so I set out weaving the two together and finalizing the results on to a DVD for test viewing. I probably make this sound rather easy, but in fact because of the limitations of my older DELL computer and the amount of time and patience that it took to work in this environment a lot of times the computer just chugged along waiting to catch up to my inspiration.

I spent the better part of the year in 2009 editing what I would call a movie negative. I carefully edited out most of the music scores and anything that did not line up with a certain amount of tonality, in a sense I searched for the harmony or shall we say the resonance of the two. I found through this process a lot of wonderful small effects that I could enhance and bring to the forefront of my video and more importantly what things I needed to bury to keep the illusion alive. As I edited the piece I was constantly surprised at how well everything lined up . Even right from the beginning with Dorothy running home with Toto to talk with Auntie Em the score seemed to accompany the action and the movements film. I remember letting the two subjects roll the 1st time and wondering how long do I let this go before I feel like I need to interfere with the natural flow of the sync? Amazingly enough it's not until Dorothy begins to sing her "Somewhere over The Rainbow" that the 1st conflict arises. During the song "On The Run" Dorothy is singing and the Pink Floyd score is blended with her in a small section that I entitled "On The Run Over The Rainbow." At first I left the original Oz score out and deemed it to out side of the box, but the more I tweaked it the more I realized that the two had more in common than I first thought.


From there it begins to get a little more complicated as far as editing goes. The 1st scene with Professor Marvel in his trailer is one of the most difficult editing because there are the lyrics in the song "Time" that can't conflict the spoken words of the movie scene. I chose to adjust the over all audio levels of "Time" and placed the piece under the movie dialog hopefully seeking out the best possibility for the two to coexist. This is just one example of the hundreds of edits that I had to find and merge to make this new version come alive. I did have some concerns though, was this whole sync to deep... to much in my own head... tunnel vision always occurs in a process that requires this much concentration and focus. More importantly to me was to try and dispel the bong-wash mentality that restricted it to only cult classic fame. This project is much more important than that, I thought to myself. Self vindication to carry on! 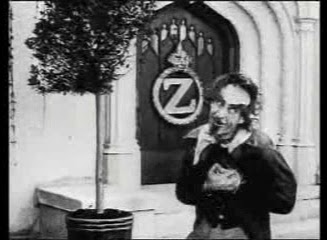 During this stage of the production I was screening a 30 min "Introduction to Oz" opener and then the urban legend itself split into 2 DVD's and in a 2 parts to accommodate the 2 1/2 repetitions that it takes to cover TWoOZ.


So, it was on August 12th 2008 that I showed my 1st edited version of "The Dark Side of Oz" to a
small group of friends, family and co-workers again at The Mystic Theatre this time however it
was something like they had never imagined. People were impressed and baffled at how the two mediums related and intertwined. One of the best descriptions I heard about that evening was
that it was like a live jig saw puzzle. I took the compliments to heart, thought about it carefully and mustered the courage to continue down what I was now referring to as "The Red Brick Road."

These stories consist of rough drafts that will be proof read and finalized
before being included in "Another Day Another Decibel"
www.ViralMediaArt.com
Posted by The Professor at 8:05 PM