As I've mentioned in earlier chapters, I have always been drawn to the syncrhonistic elements in life and without really knowing it I have been practicing these skills for years. In this chapter of my book I will try my best to show you the history, connect the dots and lay out my personal theories based on my many years of active pursuit of the nature of synchronicity and mother of all syncs... Where does the red brick road go... If you were to ask me I would direct you to "The Dark Side of Oz" an alternate Oz reality created by myself... within the urban legend itself. Allow me to explain. 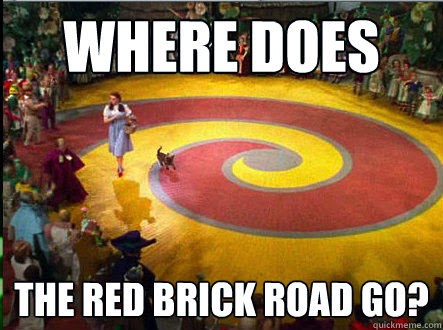 Apparently somewhere around 1995 I became aware of a very amazing phenomenon, "The Dark Side of The Rainbow" one that changed my course of direction for ever. For those of you who may be unaware of this synchronistic phenomenon, it occurs when  Pink Floyd's album "Dark Side of the Moon" (DSoTM) is played at the same time that you watch "The Wizard of Oz." (TWoO) It takes roughly 2 1/2 repetitions of "Dark Side of the Moon" (apx 42:49min) to equal the length of "The Wizard of Oz' (apx 1:40min) and the key to mystery is starting the CD of "DSOTM" on the 3rd lion roar of "TWoO" and then turning down the volume on the TV set so all you here is "DSoTM". This is old school synching at it's best, originally you'd play an official VHS tape or of "TWoOZ" and start the "DSoTM" record or possibly a CD on the 3rd roar of the MGM title and you are off.. 01:41:44 of pure synchronistic bliss!

Time has progressed and so have the techniques for music/movie sync making and It didn't take me long after hand syncing private screenings of "DSOTR" for friends and staff at The Mystic Theatre to want more from the sync's composition. To understand my studio's creative process better, you'd have to understand my tools... At that time my home studio, affectionately known as "The Kitchen Sync" because both of kitchens in my house have pots & pans) consisted of an older Dell Diminsion XPS B800 computer set up with enough memory to support two track audio to digital recording via Sound Forge software and my classic 1980's English Soundtracs 16x8 mixing console. It wasn't until I maxed out the capabilities of that older Dimension XPS and then had to purchase a new dual i7 core DELL XPS 8000 complete with the New Vegas Premiere Video Suite and DVD Architect software that things came together for me. I've been asked a lot of times what software I like to use to make my music video syncs. I chose to stay with Sony Vegas Premiere instead of reinvesting in Final Cut or some other high end editing software largely because I had already invested so much time and money into Sony's Sound Forge audio editing that it just made the most sense to stay with what I had grown to like instead of jumping ship for a big hole with a big shovel.
I have recently added to my computer line-up a new DELL Inspiron 15 - 3000 i5 core series laptop for live show play back and something more mobile. It's a huge leap forward for me because now I can get off of the DVD $ habit and show my DSOOZ in one complete screening at last (2015!) 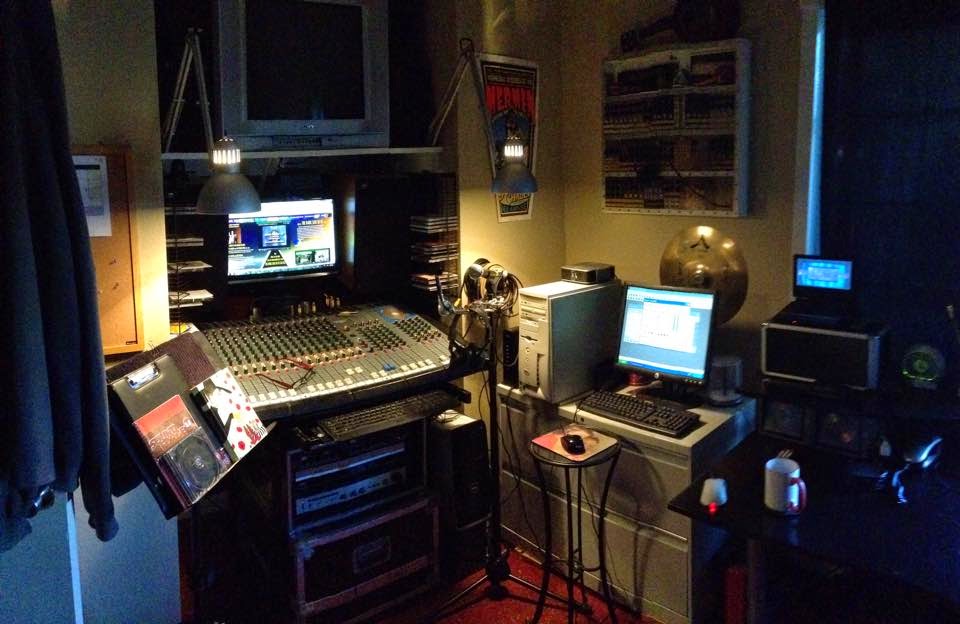 This synchronistic occurrence has been well documented over the years by a collective group
of movie sync pioneers and artists. The web site the"Synchronisity Arkive" and the original on-line chat room the "Synchboard" were originally created by Michael Johnston aka Arkiver and were born during the infancy of the internet. This is the oldest site on the web when it comes to researching and experimenting with synchronicity, music and movies. (SEE STORY) http://www.synchronicityarkive.com/

The facebook group "Film Album Synchronicities" by Merk Coolie Brighton (SEE STORY") offers us the most elaborate definitions of synchonicitic events and does an excellent job of sorting through the myths and legends from the "Golden Age of Syncing."
https://www.facebook.com/groups/492600450795208/
and Merks Blog @ Merk Coolie Brighton aka Baker B - BLOG

"Viral Media Art." I have been a member and contributor of the Synchronicity Arkive since 1998. I am extremely fortunate to have this esteemed group of friends to share this process with. Together we offer the best explanations and demonstrations in the art of practicing film and album synchronicity on the internet. www.ViralMediaArt.com

And now to dispel any thought that I repeat my DSoOZ each year... What follows from here in the next consecutive blog posts are a year by year accounting of each of the 9 performance screenings and how they relate in context to the stage performance and the urban legend itself!


AND NOW, "THE HISTORY OF THE DARK SIDE OF OZ"

Here are a few links to help clarify the history of the urban legend
RB Charles Savage Home Page - August 1st 1995 - the article that broke the story to the world.
http://web.archive.org/web/20060422200308/http://members.aol.com/rbsavage/floydwizard.html

Posted by The Professor at 6:32 AM