After straying a bit far from the Red Brick Road the recent year I decided that in 2011 I would return to the original DSoOz which included the Easy Star All Stars version of "Dub Side of the Moon" on the 2nd repetition but this year I would do something special which usually means a lot more editing for me. I decided to include a 2nd projector and 3'x4' screen under the 30'x40' theater screen showing the video. On this "under screen" I included the written text of all of the 100+ synchronistic cues that related to the video as it was watched in real time. In the past I had passed out leaflets with the cues printed on them to enlighten the audience, but I had never been able to show the audience in such a big way the over whelming amount of  visual and audible synchronistic cues. 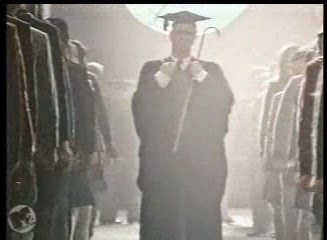 I've always believed that a costume can relieve you of all responsibilities... 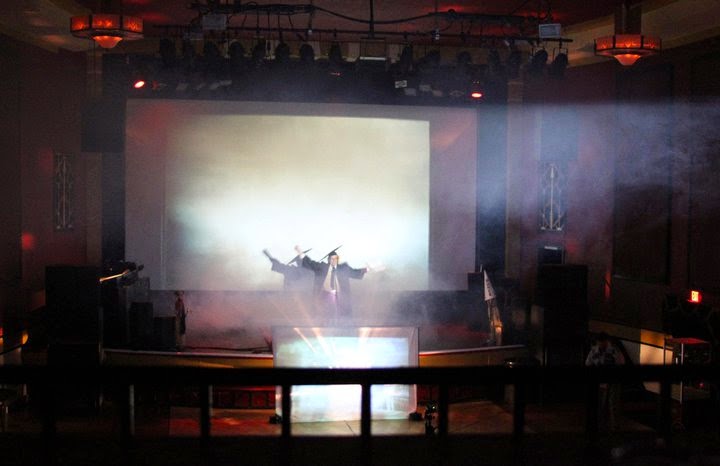 Since I had already used parts of "The Wall" in my "Introductions to Oz" openers, It felt only natural to adopt the persona of "The Professor" from the movie and begin to really address these screenings as more of a learning experience... a course in higher education as it were. I acquired a few props and a lot of banter directly stolen from my long time theater counter part Lastas Palas, and pushed myself to not only speak and perform on stage, but for the most part do it as a 1 man act! To make myself feel comfortable and in character I found the largest most ridiculous graduation hat that I could find and an over-sized grad smock with a cane and a bad mustache... I'm no one to be trifled with, I assure you!


At this point I'd like to point out that I have stolen every thing I've ever done...
"A good artist steals the material and makes it his own,
a poor one copies and repeats his mistakes."
The Professor.

As the Professor I instructed my 1st "DSoOZ Class 1A" from a side stage podium and a Webster's Dictionary cued to the word "Heckler" just in case. I also brought along with me, what I lovingly refer to as The Professors "Wayback Machine.". The Wayback Machine with all of lighting and fog was well hidden behind the 2nd screen just under the large theater screen that would be displaying all of the sync cues in text form during the video screening. As a tip of the hat to the golden years of hand syncing, I made my own visual cues and hand synced all of the sync cue text on the 2nd DVD/projector by hand. When you try to do a 1 man act you can use all the help you can so I  also made good use of wireless off & on switchers in my coat pocket so I could trigger any effects at any time during the performance. It was especially effective during the scenes with "Oz" himself and in the 'Haunted Forrest." 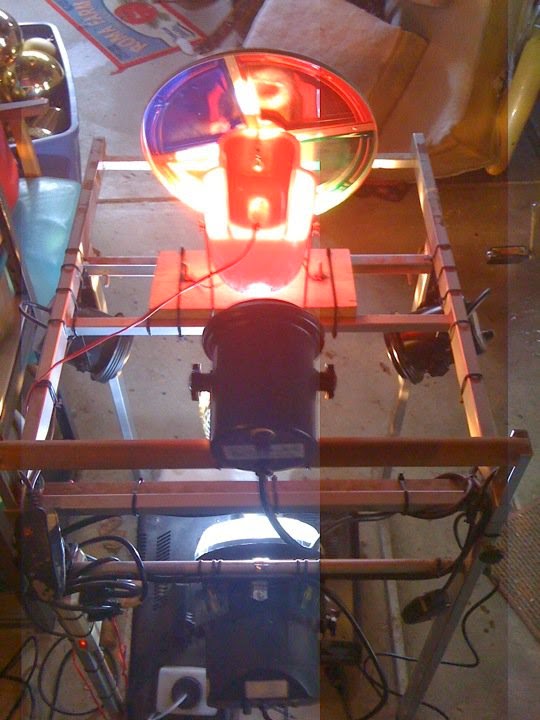 At the end of this show I always love to have a Q&A about the Urban Legend or my process with it, I'm always amazed at the questions I'll be asked... "What gave you the idea to do this?" and "Can I buy a DVD of this?" All I can tell you is that it gets back to the very center of this book... It's the Community around me that inspires me! whether it's the local music community or the Synch Community somewhere off of this planet, People + Resources= Creativity!

I told the audience that this was more than likely my last "Dark Side of Oz" and thanked them for all of the love and support through the years. I don't know how many of them actually believed me, and I almost even believed myself, but as it turned out it ended up being a great set up for the next year!

Things went so well at this screening that I asked Ken O'Donnell the owner if asked if I could have the theater for one more evening on my birthday a few months later.  Approval was given and addition to all of my DSoOZ screenings that I had performed at The Mystic, I produced an
evening that I called "The Dark Side of Television" & "The Dark Side of Space",
it was the best way that I could think of to celebrate my birthday!