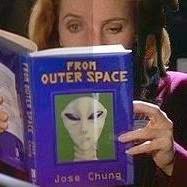 FILM ALBUM SYNCHRONICITIES
facebook Group
Merk Coolie Brighton / Baker B:
I was reading up today a bit on Randy Teaford's aka The Professors theories about setting up synchs...

Randy synchs the famous Sing'n in the Rain sequence with Billy Idol's Dancing with Myself. He calls it a 1 Drop Synch, "in other words, like "The Dark Side of Oz" it has only one start point and runs the continuous length of the piece."

In my terminology, when I talk seriously about synching every once in a while, this can be called a tile, with one cue point -- the one degree of manipulation (cuing music with video) that creates or reveals the synchronicity. One can call this a tile because it can be fitted into a larger concept composed of several or even many such cued regions. For example, I've also created a tile using Gene Kelly's dance in the rain, a "1 Drop Synch" (drop... rain... good one Randy!). The track is ELO's Stand'n in the Rain, and I found it about a year and a 1/2 ago after some experimentation with the Sing'n in the Rain movie as a whole down through the years now. It's one that I knew would work even before I mashed them together in reality. It's also a tile in the relative middle of a larger work of tiles -- central in several ways.

Randy also talks about centerpoints in discussing his Sing'n in the Rain synch: "Like most of my syncs I have what I call a center point and my ultimate goal is to edit the video or music as little as possible. I look for a major "wow moment" where both mediums connect into something more than just a random moment of coincidence and line them up in my video and backtrack from there. In the case of what I call "Dancing In The Rain" the center point comes near the beginning just as Gene opens his arms in that big Ta-da moment and as Billy Idol's song hits the 1st title chorus... "Dancing With Myself." A true 1-drop sync, no editing just that one start point, wind it up and watch it go!"
I believe this is a natural way to cue up these 1 Drop Synchs or straight synchs as Karl may call them. These natural cues can come at the beginning, the end, or anywhere in-between in the tile or "cued region".

So let me go back to DSotR (aka Dark Side of Oz) since that's the one people will be familiar with. The standard cue for this most popular of all a/v synchronicities is the 3rd roar of MGM mascot Leo the Lion. However, to me if we look at it closer we have a nifty internal cue (this is what I'd call a ""wow moment" to use Randy's word turn) where the bike riding Gulch appears right as the cacophony of bells begin in the DSotM track "Time". If DSotR was crafted on purpose, this seems like the primary cuing point.

So is Leo's 3rd lion roar just a kind of random element that someone traced back to or backtracks from Gulch-Bells to properly align DSotM with TWoO? This appears *not to be the case*, and that's where we can pass from conscious creation by the syncher (or possibly the musician or group of musicians who consciously created the synch, if you're using that angle) into something else. Logically a tile does not have 2 natural cues or 2 degrees of manipulation. It has one: "1 drop". The rest is synchronicity.

From here we can go into the differences between synchronicity and synchronization.To me, tiling is still synchronicity through and through. Each tile is a "1 Drop", but also linked to others to create a kind of *rain* of drops. There -- I figured out where *that* was going.

Read more from Merk in the 2003 Oz/Floyd Paradox interview @
http://www.sunklands.com/oz-floyd-paradox-01