One of my many interests outside of world of audio and video is mythologies, more importantly how to create and propel your own original mythologies! As I've mentioned in previous chapters my mid 80's performances were based around a tight group of very creative friends, "The Chefs of Heaven."
There was Lastas Palas or "The Smooth Mouth Hound" as he was known in our circles of friends. Lastas had the gift of gab and the ability to turn a phrase in a way that I had never heard before, somewhat like the beat poets of the day, but more like a train of thought that was always perfect in it's conception and delivery. We had a long time working relationship which continues even to this day, he is the story teller and I am the picture framer. A few members came and went through the early years, but our core group consisted of a few close friends. Jon Hendricks Jr, oldest son the world renown jazz singer Jon Hendricks of "Lambert, Hendricks and Ross" fame was one of those core friends. Jon has the soul and voice of a great jazz performer as well as the guitar skills to back it up. Then came my older NYC brother from another mother, Ari Camorata. Ari brought the Sax and clarinet sensibilities to the group as well sporting a well manicured mustache at the time, his ability to find his way through some of the deepest avant-garde material we wrote always amazed me and the fact that his New York attitude  and style of playing was a welcome balance to the sometimes over powering spacial effect of the rest of us... a little like Wayne Shorter playing sax with Weather Report

On October 19th 1985 Claire and I were part of The Creative Arts Council, a non-profit group centered out of the Luther Burbank Center in Santa Rosa California and one  that supported creative art performance in our community. We had originally joined this council with the plan of introducing the counties 1st music and computer festival... something that had never been attempted before and only possible now because of the advent of current technologies. My plan was to present a full stage performance on the king pin of our mythological foundation, "The Jazz Elephant Story."

This is the story of a young elephant in a jungle pre-zoo setting on the planet who through a clan destined visit by his great Grand father elephant finds that he has developed some unusual talents, ones that actually lead him to discover and propel the first music ever heard on this planet.

The production centered around Lastas telling the Jazz Elephant Story over my programed tracks on the Mac+ and my banks of studio keyboards and samplers, some I owned some I borrowed from Stanroy's Music Center and Don Andres's music store. It was quite a big production to pull off, I had contacted Kathleen McDougle and her dance troupe and asked her to choreograph their performance to our computer generated score and to interpret the story into modern dance. As "The Chefs of Heaven" we were known for featuring food or metaphors for food into all of our performances, sometimes cooking the meal for the audience as the performance and serving it to them when we were done. This show was quite different however than the usual small venue or private functions that we were known for, we had the full use of the theaters sound and lighting as well as the 1,000+ seated room and at that point was the largest production that I had ever tried to write and direct.
Our production was received wonderfully and lasted about an hour.  It was the featured performance at culmination of a two day event that celebrated music and computers technologies in the arts. 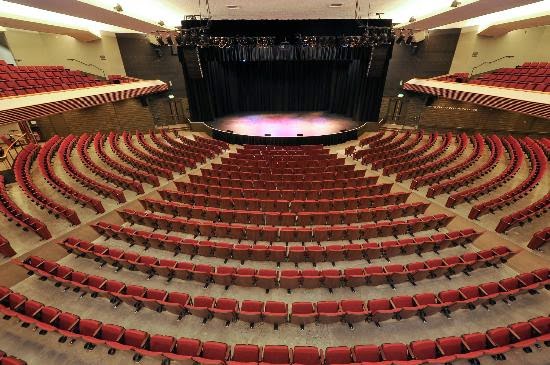 It is even today, personally one of my greatest achievements because I felt like it brought attention to a new direction in the arts and brought with it a following of fans, followers and even a support group for our computer users called M.A.C.S.C.A.P. ie Music and Computers Society for Composers and Performers. These were the days of early electronics and the use of computers in stage and recording productions were just beginning...