"TALES FROM THE BIG BLUE CHAIR"

During my tenure as House Engineer and Booking Agent at the historic Inn of the Beginning in Cotati California which was roughly 1997 to 2000, I had the pleasure of working with a lot of great up and coming artist's and bands, probably to many even to count... The Inn was a small club, about 250 when slammed wall to wall, which was all to common in a small college town with 3000 Sonoma State University students right up the street. With 4 to 5 shows a week, I used to say it was like having a concert in my living room every night!


One of my greatest personal pleasures was having the ability to book myself! 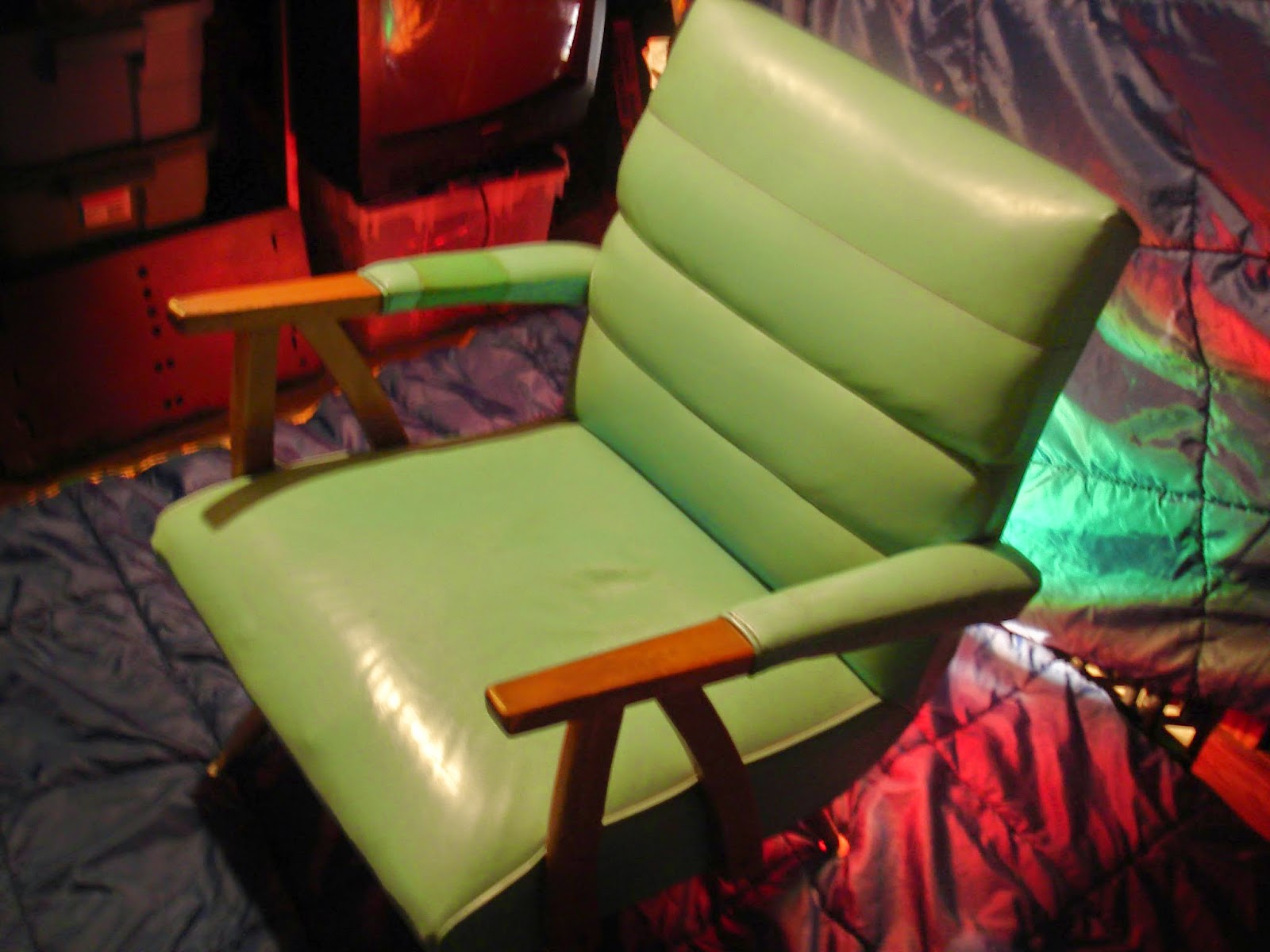 One of my signature events was "Tales From The Big Blue Chair" which took place in a few locations around Sonoma County. I had been reading from Laurie Anderson's "Nerve Bible," her personal performance / life biography when I came across a concept for a show that really appealed to me, A self generating event that she would conduct on the streets of NYC. I've never been the one to invent the wheel, more of the one who would re-imagine it in a new and interesting way and make it my own. Quote: "A good artist borrows someone else's material, a great artist steals it and makes it his own." Laurie Anderson's street improv performances and technical abilities helped me to hone in on my own personal form of performance art, one that is more interested in the ? rather than the applause that one may get from its audience.

The Concept: To create and perform a self generating public event that would draw people in as spectators as well as performers. I called it "Tales From The Big Blue Chair." The premise was this,
place a comfortable big blue chair center stage in front of a large flat screen TV set and two other smaller satellite TV sets on each side of it. This chair was wired with lighting effects and even a fog machine, and given the opportunity I could make it appear as if it was going to shake, rattle and fly right off the stage. With these three TV screens around the chair I could create the illusion of motion in all most any situation, flying thru the clouds, hyper fast video from pieces like "Koyaanisquatsi" and "Baraka" to slo-mo video and lots of psychedelic imagery. It was quite a visual scenario to set up and I sat like a spider waiting for a fly to fall into my trap. One of the other important elements to these avant-garde performances beside the video aspect was the use of sound effects, music beds and back tracks to accompany each participant to help fill out their story or mood. The chair also came equipped with a manikins arm attached to it that was holding a mic directly in front of you so as you sat down it encouraged you to talk into it. I even had an effects processor on the vocal mic so that I could change the tone and pitch of the participant, anything from Mickey Mouse voices to the voice of Satan... it was always great for a laugh!

The Deal: The general public was offered two choices upon entering the Inn for one of these events, #1 pay $5, take a seat and watch the spectacle or #2 spend 5 minutes in The Big Blue Chair! My general feeling was that, knowing human nature and my audience, the guests would generally take the 5 minute Big Blue Chair option rather than part with their $5 bill. This was fine for me because every time someone took that option I had one more performer for my chair whether they realized it or not and after their 5 minutes were over in the chair, I now had my audience. 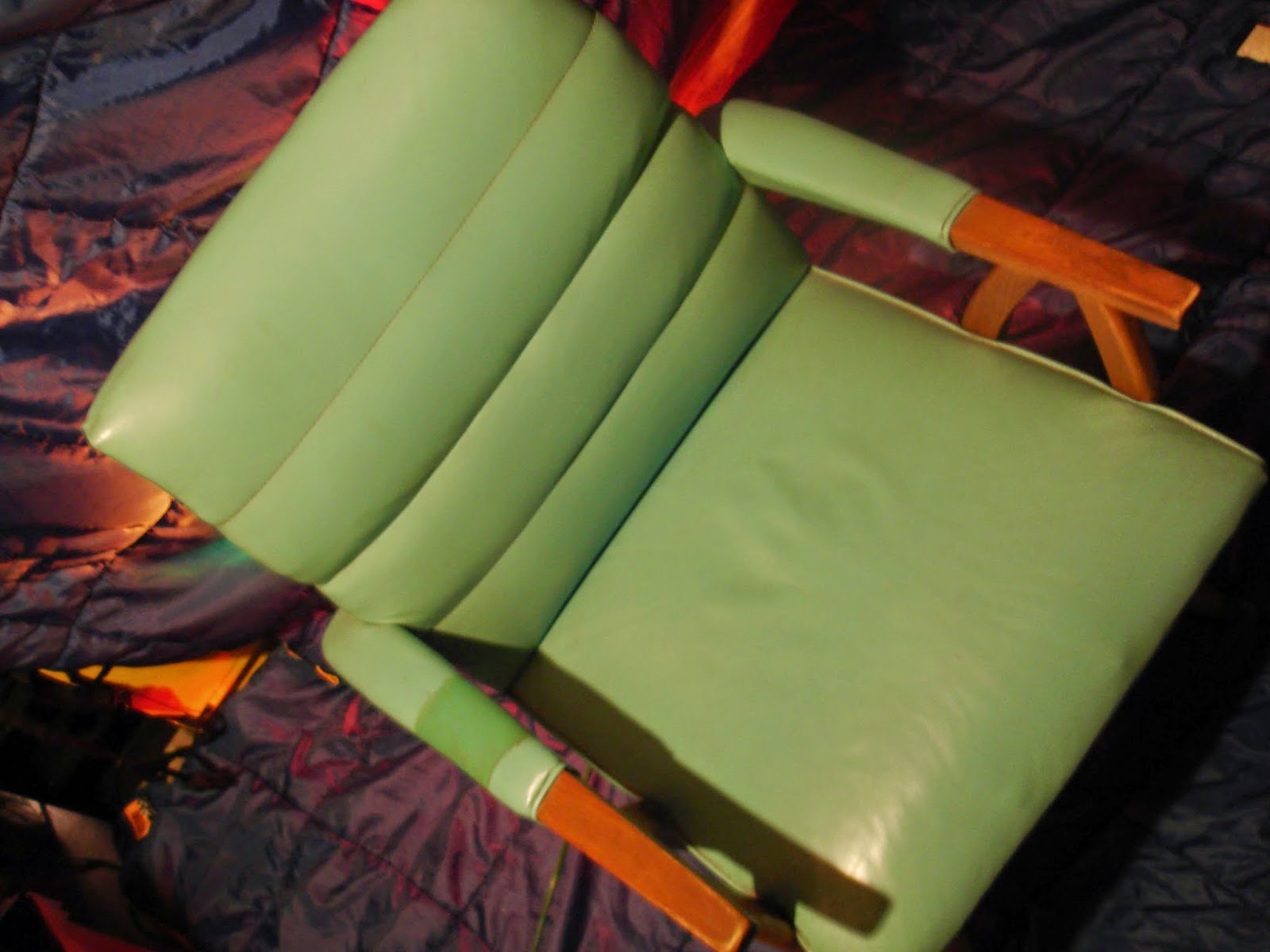 One by one they stood in line at the door making their decision of options and then approaching their designated spot to be responsible consequences of their actions. At first, before the word got out on the event I had random people sitting down and wondering what that should do while sitting there for the 5 minutes, which must of felt like an eternity to some. I had placed some of my favorite Chefs of Heaven and Lastas Palas scripts around a coffee table I also had on stage as well as some random notes and even some Snapple tops with all their clever facts to read to the audience to better prepare my performing guests. I remember a older man with a big gray beard sitting down and telling us the most fascinating Scottish tale in the deepest accent, it was almost unrecognizable as a language, It may have been his own unique accent or it may have been the ale that he was drinking as he spun his story but by the time I added some samples of bagpipes in the background with some rolling hills on the screens by the time he finished his tale everyone who heard it was almost in tears... Bill, The cook from the kitchen sat down one evening and read his shopping list for the week over a beautiful piano piece, A few of the local rapster's would bring there vocal styles as I asked them read the selected Lastas Palas scripts over some rap & hip hop beats all while sitting in this comfy big blue chair! Local's like Chris Marvin held court from that chair on many an evening and spent much more than his allotted 5 minutes of time.

Each performer when they finished their 5 minute turn in the chair would retire from the stage and typically buy a beer with that $5 that they saved at the door, always making the bar tenders very happy and me a very popular guy! I was sure to record as many of these performances as possible, I believe I did about 6 of them over a year period at The Inn and they were always a lot of fun. I had hopes of collecting and remixing some of these live improv stories into a commercial viable option for sale but time passed and I had moved on to other larger projects at hand.

The Big Blue Chair did however open the door for me to new ways of connecting with an audience with my work. A good bases to establish the much larger events that I wanted to be design!