"ANOTHER DAY, ANOTHER DECIBEL" - FORWARD

You know them or at least you think you do, they the the people who are always back there behind the mixing board turning nobs, reading meters and answering questions like "do you really know what all those knobs do? and "where did you learn to do this?". You're really not quite sure what they're doing back there and while it always seems as if they have everything well under control there's always a hint of confusion and chaos around them. You're been a regular at this venue, theatre, club or church for years and you've made some great shows and memories there, and every time you've seen this person you've said to yourself. "He always does a good job... we're in for a great show tonight." 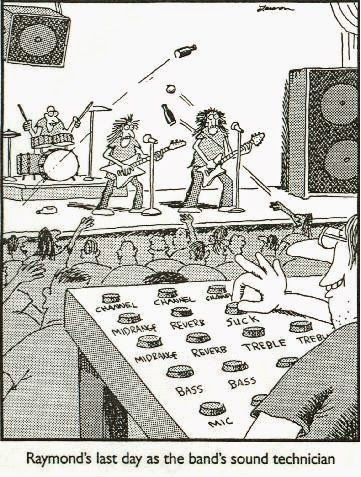 Such is the job of a professional Sound Engineer / Production Manager. You hold up your end of the bargain, to present a high quality show no matter what they throw at you. You try to never say no in this business and you always try to make it seem as if the performers as well as the audience can have any possible request... from the channel input lists and tour riders to the extensive guest lists and rowdy audiences... you treat it like it's another day at the office, after all they are all your guests!

*You're only as good as your last show.

From a house Sound Engineer to the Tour Engineers will all have our main objectives, In an industry that's based largely on word of mouth the goal is to complete the task at hand and keep your sanity and good humor while doing it. Many of my friends are top Sound Engineers and some of their road stories can be found here later in this book, we've all experienced things that are well beyond anything that could ever been written. Through the years we've all had the privilege of mixing some of the worlds greatest talents, not only in top class venues or our door concerts & festivals but crappy little dives and road house... the same creed holds true. The show must go on!

*We all have ways of making our day and our job a little more pleasant...

Touring is a fun, crazy world in a bottle that you shake up every night and recover from the next morning... In a world of unknowns and uncertainties I gave myself one little joke or shall we'll say a release in my busy touring schedule. As a bands Road Manager & Sound Engineer information is king... what time here, what time there and all the engineering variables in between, there was always one detail I always left unknown... "what kind of pie was I having that night?" I even left it open in  the hospitality portion of the contracts that I sent out... *RM requests 12" deep dish pie of local origin. A non specific request for an item that would show me one of two things... #1 they read the contract and #2 what kind of pie am I having tonight!
After doing this for a few years I found that this process gave me a good gauge on the amount of love coming my way. Some venues supplied me with fresh baked peach pie ala mode others past off Safeway apple pies or even in one case a mince meat pie, a poor excuse for a pie if there ever was one. My requests were not taken lightly and I even had in bold print at the bottom of the contacts: NO PIE NO SHOW! Every show I took on this pie challenge and after a while it became a symbol to me, that in a world of no control I could except the fact that I had absolutely no control over one thing... what pie I would receive on any given night... but there better be one!

after all, when you have pie at the end of the night you have friends!