One of the more notable projects that I worked on during the mid 80's at my Sound Source production facility was a film project with local celebrity Charles Shultz of "Peanuts" fame and a local guitar player and song writer by the name of Paul Rodriquez. I love to tell this story of our 1st meeting and the results that came from it because it drives home a favorite point that I like to make about creative people and technology always leading the major changes in our culture. 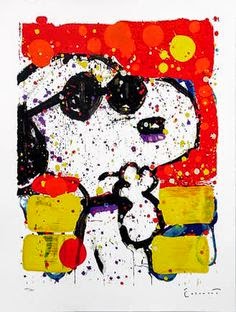 I was in the studio working on a new project that had come my way when the phone rang.
I picked it up and said "hello Sound Source" how can I help you, a voice answered... "My name is Charles Shultz and I was told that you may be the man to help me solve a small problem that I'm having". I remember stumbling a little bit as I collected myself and took the call. It would be a pleasure sir.. I said, What are your concerns. He begins to explain "It seems in my next Peanuts film I will need Snoopy to play a jug... now he can play the jug all right but the problem is that he can only play one note... two at best and I will need him to play an entire song".
The project as it turned out was the only animation and live actor film that Mr Shultz (Sparky, as he was known by some) had ever released, "The Girl In the Red Truck" starring his daughter Jill Shultz and the full cast of Peanuts characters. I was brought in to assist Paul Rodriquez in my facility and to co-ordinate our project results with Lee Mendleson Productions in Hollywood. A lofty project for me and at the time when technology and timing was on my side.

I can certainly help you with that Sir and if you would give me about an hour I'll be in your office with an example of how I can help you. "In one Hour?" he said in disbelief, yes sir it can be that simple. It seems like such a non issue at this point in time with digital recording and computer graphic techniques, but in the mid 80's we couldn't record directly to CD yet and the world of keyboards, synthesizers and MIDI was just beginning. I took on the challenge by heading directly to the health food next door store to buy a bottled drink... but, more important than the drink itself was the size of the bottles mouth. I made the proper selection and headed back up to my studio above Stanroy's Music Center to get to work. I was currently in charge of the keyboard at Stanroys which gave me access to all of the latest release of trendy new keyboards and more importantly samplers that were hitting the market. Fortunately I had recently purchased the 1st consumer digital sampling Ensoniq Mirage keyboard and had integrated it into my 2 rooms of keyboards & synthesizers. The Mirage had a pretty low sampling rate even at it's fastest setting but is was good enough to put me ahead of the tech curve, secure me clients who needed my services and prove a point!
In my studio I opened the drink and drank about half of it, leaving just enough in the bottle to resonate the proper note... A few sips and I had it. I sampled the one blow off of the bottle top into my mic and then into the Mirage sampler where I preceded to play Vince Garaldi's famous 8 note Peanuts theme on the keyboard and then recorded the musical phrase onto the Nakimichi cassette recorder for a tape to bring to show Sparky.

I arrived at his office with the studio cassette and a small portable player to play it on. His receptionist guided me back to his personal office where I found him sitting at his desk next to a sketch board with some Peanut cartoon work-ups. He greeted me with a warm smile and hand shake... I could tell that he appreciated my timely approach to his dilemma! We talked briefly about my studio facility as I set the cassette player on his desk and inserted the tape. I explained to him my process of digital sampling and how I could manipulate sounds to suit his purpose, his eyes lit up when he heard my demonstration and the familiar 8 note theme being played on the bottle which I then showed him. "I think we can do something here" I recall him saying as we finished our short but fruitful conversation. I was then connected to Paul Rodriquez and Lee Mendelson Productions for a year of recording music segments as well as some other similar sound design projects. My thirst for technology had paid off.

Posted by The Professor at 9:22 AM