THE STUDIO KAFE - "Buck Naked and the Bare Bottom Boys"

This story is for the ones who are no longer with us...

It was the late 80's and after the return of my 1st National tour with "Crystal Wind" I was contacted by Bill Bowker from KVRE radio. Bill has been the voice of Sonoma County for decades and was now the man in charge of a new little thing called a cable radio station/night club in downtown Santa Rosa. Bill and his partner Doug Smith (RIP) made a formidable radio team and when pared up with other owner/partners John & Randi Duran (RIP) the restaurant and business concept really came together.

The Studio KAFE was in my opinion one of the most revolutionary nightclubs in Sonoma County.

Not only was it a fully functioning night club and cable radio station, It was also a bar with a great restaurant right in downtown Santa Rosa. A lot of great bands came through those doors, bands like
NRBQ, Bela Fleck & the Flecktones, Robben Ford, Jellyfish, Mojo Nixon and Adam Duritz before Counting Crows with his band The Himalayan's.

I designed in conjunction with my mentor Phil Salisbury from Sound Expressions the live sound aspects of the club and worked with Allen Suddeth who designed the cable radio and recording sections. For me during any given show, It was like working 2 or 3 jobs at once. Not only would I be responsible for the shows house and stage sound, I would also be responsible for the broadcast and recording mix in the radio booth. I would get a good 5 minutes to get a good house mix going, check with the band on monitor levels, thumbs up, head behind stage to the radio booth to get a show mix up for the cable audience, set my recording levels and joke with the DJ before heading back to the board in the house to mix the show. I had the system set up so I could monitor all of the house, stage, radio feed and recordings from the house console... an early English 28 channel Soundtrax console I believe. It was always a juggle for the first few minutes of each show and sometimes right in the middle when least expected... but once dialed I found that I could not only mix a great show there, but enjoy one as well.

They'd load-in about 4pm. You'd never know these guys were about to tear the roof off of the place! They looked like your average guys on the street, no funny rock hair cuts or quirky thrift store apparel, just... "Buck Naked and The Bare Bottom Boys" reporting for duty. 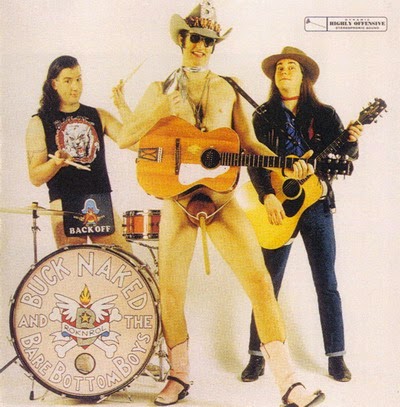 I say that only because I always found Buck and the band super pro's at what they had designed as there "Act", even though there were some fairly outlandish gimmicks to their show. On the technical end of things Buck's (Philip Bury) vocal (SM58) ran directly into a classic Echoplex tape delay set at a short rockabilly slap and his acoustic guitar was short 2 strings and tuned down to be more of a bass. Buck Naked performed on stage wearing only cowboy boots, a cowboy hat, a guitar, and a strategically placed toilet plunger. Filling out the band were Buck's brother, Stephen Bury on guitar ("Hector Naked") and David Wees on drums (known on stage as "Stinky LePew"). With songs with names like, "Teenage Pussy From Outer Space", "As long As You've Got A Face, I've Got A Place To Sit"and "Uncontrollable Flesh" it was all in all a pretty risqué show, especially for the women who seemed to make up about 80% of the typical audience.

It wasn't just the songs and subject matter that made it an adult show, you had to add Buck's persona himself. Standing about 6'2" and taller in his boots, wearing nothing more than those boots, a tall cowboy hat and that toilet plunger bobbing up and down to the beat, Buck and the Boys were an amazingly tight and consistent band and Buck's (RIP) presence is greatly missed. He was unfortunately shot in 1992 in San Francisco where he lived walking his dog late at night along the panhandle. His trademarked brand of "PornoBilly" lives on...

note: I will be adding more Studio KAFE stories as I go...


These stories consist of rough drafts that will be proof read and finalized
before being included in "Another Day Another Decibel"
www.ViralMediaArt.com
Posted by The Professor at 8:19 PM