I was informed that as a business owner in Downtown Santa Rosa and a Chamber of Commerce member you are entitled to have a float representing your business or cause in California's 2nd largest parade, The Santa Rosa Rose Parade. I took this as a personal challenge as a creative downtown businessman and especially since I frequently stood at odds with the rest of the members of the Downtown Business Association, I saw it as an opportunity.

When I say "frequently at odds with" I mean I occasionally butted heads with some on the board that were not advocates for live music venues downtown... and I stood strongly against the demolishing of the downtown landmark, The California Theater to construct the Mall. At one for our Association meetings we were asked to submit our personal suggestions for the new motto for Santa Rosa, after all Rohnert Park had "The Friendly City" and we needed something that would capture the essence and warmth of the community. All of the entries were put into a hat and then pulled and read to all of the attending members. Some suggestions seemed silly, others just not right... it wasn't until my entry was read that we saw how silly the process really was... "Santa Rosa, The City Behind The Mall." 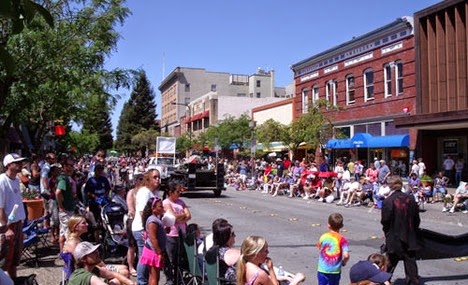 A float in The Rose Parade, what a great opportunity I thought to myself, I can get a flat bed truck and a generator and I'm half way there. I began the process by gathering all of my good friends and fellow musicians from The Sound Source and Stanroy's Music Center to join me on this big flat bed trailer pulled by a truck. My initial musical vision was a kind of twisted calliope sound, something like the old circus wagons used when they rolled into town... Omm bop bop... Omm bop bop...
I worked up a sample in my studio's Ensoniq EPS keyboard of a circus snare drums and a twisted calliope sound and tweaked it so it had a bit of a wobble to it and looped it. I believe we had one rehearsal and I remember passing around a few cassette tapes of the parade calliope loop that we would be playing to, but I really looking for something live and spontaneous, especially when it was our turn to stop in front to the judges stand for our parade routine.

The day of the parade came and we all met at the float. There must  have been about 20 to 25 people all wearing bright colors and with instruments in hand! Snare drums, Sax's, clarinets, trumpets, cymbals, bells & whistles. I only had 2 instructions for all of the participants on this little moving artistic statement, the 1st was to have fun and play along with the loop that was playing from 4 speakers on each corner of the float. The 2nd instruction... the statement, was the magic moment that I had imagined from the start... I asked each person to think of a musical note or rhythm, keep it in their head, don't tell anyone else and when I hold up my baton and ask you, then recite this note or rhythm for approximately 30 seconds... watch for my baton cue to stop and then we'll resume our music parade route like nothing ever happened.

We had a great time playing along with the calliope loop as we made our way past all of our friends in the crowd who pointing and laughing just because of the spectacle I imagine. Still, the best part came when we slowly pulled up in front of the parade judges stand and stopped... I held my baton up and then gave them the signal to play that personal musical note or rhythm and hold it until I told them to stop. It was an amazing clash, a multi-note cacophony, a sound that commanded that you  look and listen and say... what the fuck?... a bit of a raspberry really!

As quickly as we made that joyous noise we were done and back on our way, the judges looked bewildered (perfect) the crowd was confused and loving it. It was just a brief stunt in the middle of a holiday parade, but it was an excellent opportunity to make a very simple statement.... what that is remains to be seen, but the ? has always been good enough for me.