As the story goes... Set the "Dark Side of The Moon" CD to loop and wait. Start the DVD of "The Wizard of Oz - On the 3rd Lion roar of the MGM opening title start the CD!
Turn volume up on CD player...
and volume off on DVD player!


001 - The 1st indicator that the sync is correct is when the transition from"Speak to Me" to "Breathe"  syncs with the fade in of Producer Mervin LeRoy.

005 - "all you touch"... Dorothy touches the farmhands arm as he hols the bucket.

009 - "balanced on the biggest wave"... Dorothy balances on the fence.

010 - Song Shift from "Breathe" to "On The Run" signals a scene change as well as a song change.

011 - Auntie Em shows up just as women chats away in the background of DSoTM track.

012 - The sound FX rumbling at the end of "On The Run" and the sound of distant thunder and birds in TWoOZ blends perfectly with the clouds and shafts of light.

013 - The Chimes in "Time" strike just as Elvira Gultch rides up on her bicycle and dismounts. Possible bicycle reference to Syd Barret's "Bike."

014 - Uncle Henry's paint brush seems to be ringing like a bell. 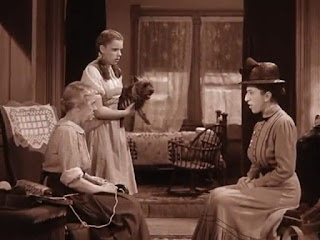 017 - Elvira points her finger on the bass chord.

018 - "kicking around on a piece of ground in your home town"... Toto escapes and heads home.

019 - "waiting for someone or something to show you the way"... Dorothy greets Toto, then leaves.

024 - During the guitar solo of "Time" the words "Past, Present and Future" are seen on Professor Marvels advertising sign.

025 - "To come up behind you again"... Professor Marvel comes up behind Dorothy.

027 - "half a page of scribbled lines"... Possibly a photo with text that he takes from Dorothy's basket.

028 - "hanging on in quiet desperation"... Dorothy appears to be hanging on every word.

029 - SCENE CHANGE - Dorothy leaves just as "The Great Gig in the Sky" begins and runs through the entire twister scene. The "Twister Scene"one of the strongest scenes in the urban legend. David Gilmour's guitar, sounds almost like a warning siren. 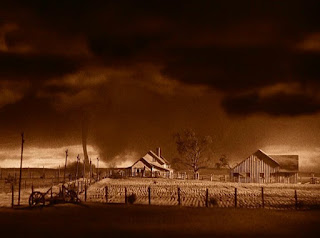 030 - "I'm not frightened of dying" is heard in the background as the twister approaches.

032 - Clare Torry's wailing, keeps keeps with the mood and intensity of the twister scene and seems to display the emotions of Dorothy perfectly. Other sync cues worth mentioning are Dorothy stomping on the storm shelter doors to get in, the door flying off it's hinges,  pieces of furniture and appliances flying by the window and finally the strike on her head and the "Dream Sequence." 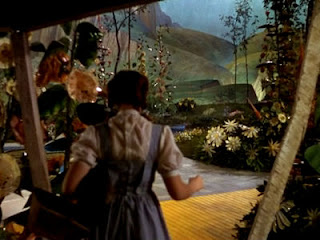 035 - "don't give me any of that... do goody good bullshit" Glinda the good witch floats down in her big pink bubble.

036 - During the guitar solo of "Money" the Munchkins gather and move to the music. When one of the main Munchkins leaps forward, the music intensity grows and so does the dancing! Watch for the Munchkin who pops up from the man hole!

038 - During the beginning of "Us and Them" the organ plays music similar to what might be heard at a funeral as the Munchkin Coroner unrolls the death certificate.

039 - At the very beginning of "Us and Them," various voices can be heard talking to each other, at times it seems like it's the Munchkin conversation.

041 - The Lollipop Guild boys, enter and then jerk and kick to the beat!

042 - "forward he cried"... The Munchkin officials thrusts out their hands and all seem to shout "forward" to Dorothy.

043 - "and the front rank died"... the Munchkin Soldiers rotate in marching rank and then stop.

044 - "moved from side to side"... The Munchkins seem to move from left to right and side to side.

045 - "black and blue"... On "black" the witch appears wearing black and as blue echos, we see Dorothy wearing blue.

049 -  "and in the end it's only round and round"... As Glinda points to Dorothy's red slippers they appear to repeat a scene and go round and round.

051 - "have you heard it's a battle of words"... Glinda appears to whisper into Dorothy's ear and then returns to the battle of words with the Wicked Witch.

055 - "out of the way, it's a busy day and I've got things on my mind"... It is a busy day indeed as Dorothy gathers with the Munchkins and dances out of town.

057 - "the lunatic is on the grass"... Well, the scarecrow is made of grass and he's certainly acting like he's smoked it!

058 - "you raised the blade" A toucan in the tree raises his blade like beak.

059 - "thunder in your ear"... the apple trees are certainly yelling at Dorothy.

060 - "all that you touch" once again Dorothy touches a mans arm.

062 - Dorothy listens for a heart beat from the Tin Mans chest as the end of DSoTM ends and then begins it's 2nd repetition.

063 - In the beginning of the 2nd repetition of DSoTM, the heart beat is heard as the Tin Man sings "If I only had a heart."