Originally published August 1, 1995
Copyright 1995, The Fort Wayne Journal Gazette
The Dark Side of the Rainbow:
Pink Floyd's Dark Side of the Moon. The film version of "The Wizard of Oz." Two profoundly successful pieces of pop art you would think are completely unrelated. Yet there exists a connection - no, really a synchronicity - between the two that escapes logic or understanding. 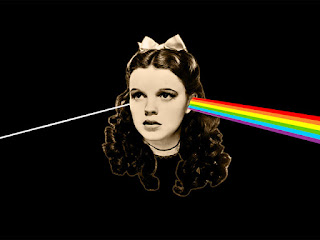 By Charles Savage,
Let lapse, momentarily, your reason and your belief in a sense of order to the universe. (Suspend, too, your belief that we might be doing some very serious drugs.)

Then rent "The Wizard of Oz," turn off your television sound, put Pink Floyd's The Dark Side of the Moon in your CD player on loop and press play at the exact moment the MGM lion roars for the 3rd time.

The result is astonishing. It's as if the movie were one long art-film music video for the album. Song lyrics and titles match the action and plot. The music swells and falls with character's movements.
Don't expect to be overwhelmed. But do expect to see enough firm coincidences to make you wonder whether the whole thing was planned. And expect to see many more coincidences that would be definite reaches if it weren't for other parts lining up so well.

If you're not really familiar with The Dark Side of the Moon, it will help to have a lyric sheet handy. But always keep an eye to the TV, lest you miss something. (Don't try the pause-play-pause game; being three or four seconds off would really neutralize the effect.)

Half the fun of exploring this marvel is watching with a group of friends and shouting out the correlations as you make connections. So we won't spell out all the details. here, however, are a few major examples just to get you started:

The numerous lyrical coincidences between the movie and the album are only part of the story. Often, the actions seems choreographed to the music.

For example, the wordless moan-singing of "The Great Gig in the Sky" is almost perfectly matched with the tornado scene, rising as the storm gathers, falling to a lullaby when Dorothy is knocked out by the window, rising again as the house spins up in the sky, then falling again as the house returns to earth.

The song begins with the gathering storm and ends just as the house hits the ground. Dorothy gets up in silence, walks through the house, and then just as she opens the door to reveal Technicolor Munchkinland, the opening sound effects of "Money" startle the listener. (Moreover, "Money" was the first song on the LP's second side; Munchkinland is the opening of part two of the film.)
And then there is the clincher: The album's dramatic ending heartbeats sound as Dorothy listens to the Tin Woodsman's empty chest. It's bizarre, uncanny. And it's more than a little puzzling.

There is no obvious reason why a classic art-rock album recorded in 1973 would be even remotely related to the 1939 film, which is based on the story by L. Frank Baum.

After all, it's hard to imagine Roger Waters, Dave Gilmour & Co. painstakingly writing their music to the movie's timing. It's even harder to imagine that a band so gimmickry-minded (it stuck a blinking LED light on the CD packaging of its latest release, PULSE, for example) would keep quiet for 22 years if it had done it purposefully. And at least for now, no one is talking. Several calls and a faxed request to a Pink Floyd publicist at Columbia Records were unanswered.

A slightly less inside source, Fred Meyer, the secretary of the International Wizard of Oz Club, said this: "What? I don't know anything about that." He added that he had never even heard of Pink Floyd.
All of which makes the origin twice as shrouded in mystery. Why would anyone just randomly play the album over the the film, timed with the MGM lion's roar?

In April [1995], someone posted about it on the Internet Pink Floyd newsgroup, saying he or she'd heard about it from "some people down in Los Angeles." Most users told the poster to go back to his drugs. And a recent posting on the alt.music.pink-floyd newsgroup asking for help in the mystery produced no clues to the origin of the oddity.

In the end, the synchronization was either intentional or a cosmic coincidence - the musical equivalent of the "Infinite Monkeys on Infinite Typewriters Eventually Producing the Complete Works of Shakespeare" effect. 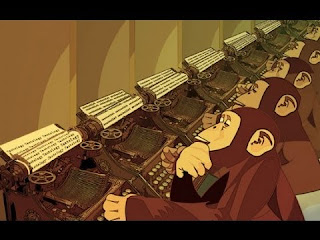 Perhaps all it means is that when everything under the sun is in tune, including two pieces of cult-status entertainment seemingly completely separated by time and genre, it will seem as strange as when the sun is eclipsed by a moon.
Posted by The Professor at 11:28 AM