"THERE'S A SPACE SHIP IN MY ATTIC"

Shortly after graduating high school (1972-73) my 1st wife Annie and I rented a wonderful old 2 story rectory house house next to a church on a street that was known as "Christmas Tree Lane" in Long Beach Ca. It was a classic old wooden structure that had 2 bedrooms, a bath and a great little room right above the front door with a window that opened from floor to ceiling. It wasn't a very large room as a matter of fact it was only about 5' wide x  6' long and had a bench to sit on that faced the window, we were told it was the prayer room. We lived in the house for about a year and found it was a great place for entertaining especially during the holidays because the street was lit up with Chritmas trees and people would travel for miles to drive up and down our street. Now, It might of been the eggnog and I am a child of the 70's so we'll say no more but, I'm not really sure how this idea came to me.

One afternoon while I was sorting through some things in my garage I stumbled on a large 24' clear fiberglass bowl that was part of a water feature that was in the backyard. I noticed that if I turned the bowl upside down it looked a lot like a space ship! That's all it took to start me off on this space ship quest. I decided to paint the inside of the clear bowl with a green glow in the dark spray paint and add a black light bulb inside to make the ship really glow. In my teens I had been into slot cars and I even saved a few cars and a few motors, so I thought to myself, why not put a slot car motor into the bowl with the armature shaft sticking out the hole and attach something fun to the end of that! So, that's just what I did... I attached a bass guitar string to the shaft as best I could and then attached a painted florescent green 76 ball to the end of it. I hope you can see this image of a big glowing green space ship bowl with an antenna sticking out of it with a glowing orb on top of it, it was thing of beauty!

While I was building my space craft I was thinking about the possible locations around my house where I could put it to get the most effect, the back yard in a tree came to mind, on the porch in the dark, then I thought... the prayer room... of course! I took the completed ship up into the little room to see where I could set it up, it was so small there really wasn't much room at all. Then it occurred to me, if only that wall wasn't there or... 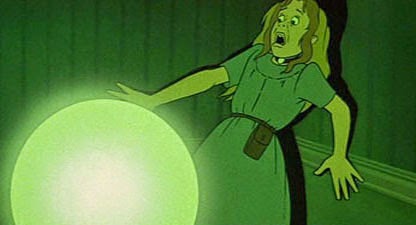 What if the space craft crashed into my house and landed in the attic!

Fortunately for me the wall had a fake panels that you can take down so you could store things away and that made my access really easy. I removed one of the panels and found a large cardboard box that I covered with a black piece of velvet and then placed the space ship as far back as I could. The attic was really dark and with the ship sitting on the black velvet box it really gave it the feeling of hovering, the effect was magnificent! I even made 2 switches so I could turn on the space ships black light bulb and the motor separately, that why I could surprise some one with an unexpected action. I was just about done when I realized that I need to add a little more back story to my tale. I drilled a small hole in the wall and burnt the edges of it to make it look like a laser had burnt right through it and then I put a burn mark on the far wall to show where the beam went. This house always inspired me.

My story was to anyone of our friends that came to visit, "I was sleeping last night when I heard a loud crash and thump upstairs in the attic. I ran up there and heard a weird whirring noise behind the wall. As I leaned in to get a closer look a huge sound like a crackling electric bolt flashed in the room and a beam of light burnt right through that wall, just missed me and hit the wall right over there!" One by one they fell into my trap, I'd lead them upstairs telling them my tale straight faced as possible and then turn on the space ships black light bulb when we all had arrived. "Go ahead" I'd say "take a peek through that hole and tell me there isn't something weird going on up here!" Some shook their heads at me in disbelief others were just plain confused by the possibilities of the situation.
Either way I had them, as soon they peeked through the hole to get a closer look and saw that glowing hovering object I turned on the motor inside the space ship. It whirred and bounced around like a crazy rabbit and with that glowing orb on top of the antenna spinning around, it gave the ship an almost unearthing noisy and colorful effect. Thats when I would yell...


"Look out... that's just what it did last time before it shot the laser at me!"


I only mentioned this story because it it sets up my personal creative path in life... make due with what you have at hand and always try to keep your friends laughing.

Posted by The Professor at 9:51 PM