The Aces performance at the 2009 International Blues Challenge 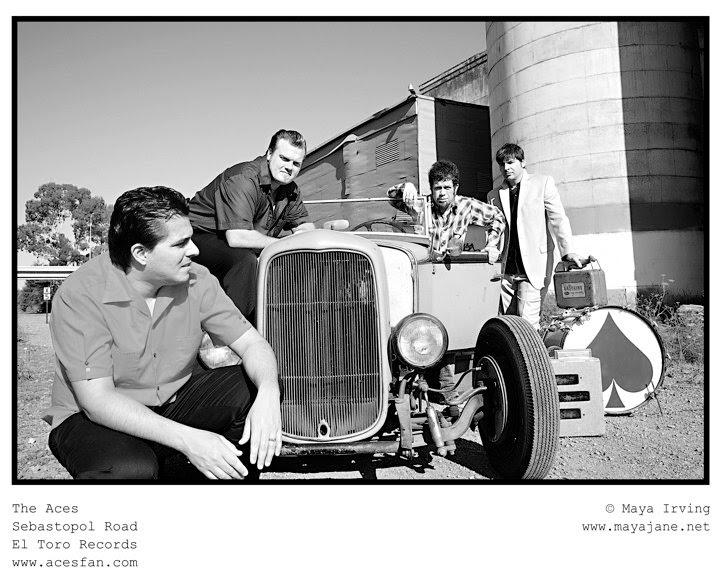 Derek Irving - It was 1994, I just left Mitch Woods and His Rocket 88’s after a four year tenure playing guitar with Mitch and his band.  I was 24, been on tour for four years, been to Europe a few times, toured the States countless times and recorded Mitch’s record Shakin the Shack at Fantasy Studios.  I thought I had the blues world in my hands and Sonoma County was there for me to take.  So fresh on the local scene, I put together a trio with, Steve Wolf on bass (who was playing bass for Mitch Woods and left the band when I left) and Mike Rosas on drums. Mike was also in Mitch’s band during my stint but left Mitch’s band abruptly two days before a five week US tour some time in 1992. I called the band “Derek and The Aces”.  We’d play local gigs at John Barleycorns (Santa Rosa), The Tradewinds (Cotati) and Blues on Lombard in San Francisco.  Unfortunately one night after a gig at Blues on Lombard in San Francisco, Mike who’d been drinking Crown Royal and smoking pot failed to make it home that night.  He crashed his car in a ditch on Highway 116 between Petaluma and Sonoma after falling asleep on the drive home.  He was within 10 minutes of his house leaving behind a wife and two children.  I remember getting the call in the morning from his brother saying Mike passed away.  I was in shock and it felt a bit like it was my fault (even though he was an adult and I asked if he was ok to drive home and he said yes).  The funeral was especially tough seeing his wife and two kids.  One of his children was about two years old.

Soon afterwards I recruited Reed Baldwin to play drums and shortly after that Chris Marvin would come in on drums.  This combination of the band (Steve Wolf, Chris Marvin and myself) would play around Sonoma County.  Playing the Ale Works on Fourth Street and then getting a residency (before they were popular) every Tuesday night at The Tradewinds in Cotati, this was around 1995-1996.  At the same time some of my other friends and fellow musicians were on the scene most notably Stu Blank and Richie Blue.  I used to go see Stu Blank, Richie Blue and even Steve Wolf when he was in the band while they played in local blues band Texas w/Doyle Bramhall II.  My band was still called Derek and The Aces and Tuesday nights at The Tradewinds could be decent where we’d each make $50-$75 or it could be not so decent where we’d be lucky to walk with $10 each.

I was persistent though and kept at it.  Shortly afterwards Sky O’Banion would start coming by sitting in with the band playing some of the most authentic blues harmonica I’ve ever heard. Not to mention Sky has a great knack to have lyrics that flow like streams of consciousness.   I was singing and really didn’t want to do it, so I’d encourage Sky to sing.  He was coming by so much; I said why don’t you just join the band.  So he did and eventually he was singing all the songs.  I was about 25 by this time and he was a few years younger.  When Sky joined I changed the name from “Derek and The Aces” to just “The Aces”.  We were starting to build some good local momentum, playing around locally but primarily Tuesday nights at The Tradewinds still.  Mooka Rennick who owns Prairie Sun Recording Studio was one of the regulars and was a good friend of my drummer Chris Marvin.  Shortly afterwards we were over at Prairie Sun recording a bunch of songs.  However to this day, I don’t know what happen to the two reels of tape we recorded there.  In the same year, my ‘67 Chevelle would be stolen with Sky and my equipment in it (my two guitars, my amp, Sky’s vintage amp/mics, his harps and my PA). A month later my car was found abandoned 5 miles from where it was taken with ALL of our equipment still there.

Then one night in 1997, we were playing in Santa Rosa at Masses Billiards Sports Bar on 4th Street. Out of the blue Mooka shows up and who was with him? Tom Waits!  That’s right Tom Waits. I knew who Tom Waits was but was not super familiar with his music.   They stayed for a bit then left.  The next day Tom faxed Mooka saying “The Aces were HOT last night, thanks for a great show ! Tom” .  To this day, I still have a copy of that fax.  Then about a week or two later Tom asked the band to play at one of his kid’s last day of school events in Freestone.  Of course we took the gig.  Then a bit after that, I got a phone call to my home phone.  After saying hello, a gravely voice said “This is Tom Waits, I’m over at Prairie Sun do you want to come by?”  Yes I said, he said “ok come by tomorrow”.  I called Sky excitedly saying that Tom Waits had called me but this did sit well with Sky.  Sky yelled at me, curse at me, etc. I chalked it up as frustration/jealousy and hung up.  I believe Tom was recording the Bone Machine record. I only did the one day there (kind of a tryout I guess) but I was not familiar with Tom’s music and was not prepared.  So I missed this opportunity but had a learning experience.

Now I’m always prepared. By late ‘97 Chris’s demons got the better of him and I excused him from the band but recruited Mike Gutsch to play drums.  By this time the only other blues band I felt competition from (and jealousy towards) was Eric Lindell and the Reds.  Eric’s band would pack local clubs and we’d still struggle at The Tradewinds and anywhere else we could play.  Eric’s brand of “funk blues” seemed to connect more than our “traditional chicago style” blues did. Also in 1997 Stu Blank would approach me about wanting to book gigs for The Aces.  Stu was a hustler, loved by everyone, a huge teddy bear and someone I looked up to musically and musical business wise.  I said if you can get the gigs, you’d get your percentage. Which I think was either 10% or 20% for any gig he could get us.  Stu was well connected and was able to get us gigs.  He did this for a short while until bassist Steve Wolf decided he couldn’t make a living doing my gigs and what ever other gigs he could get locally so he left to play bass for Mark Hummel and the Blues Survivors.  This ended the run for this incantation of the band.

So in early 1998 Sky, Mike and myself sat idle until Mike had the brilliant idea of adding second guitarist, David Burke.  I was hesitant at first.  I knew Dave and respected his playing but didn’t think two guitars and no bass could work.  Boy was I wrong.  The first time we got together we sounded like a sledgehammer.  Loud, raw, mean and in your face – we had a sound!  We’d go on as The Aces and had a 12 year run.  We’d open for The Paladins, Tommy Castro, Arc Angles and Charlie Musselwhite.  Also around ’98-‘99 there were more local blues bands around but I was not in the right mind to want to be fellow musician friends with them.  It was just The Aces way.  We had attitude and we were cocky to the point of isolation. Looking back I’m sorry for not recognizing this and I’m sure I missed some friendships along the way.  In 2000 Bill Bowker asked The Aces to play the Sonoma County Blues Festival.

Problem was, Sky was incarcerated.  So Mike, Dave and myself wrote letters to the judge asking that Sky be released for the day to play the Blues Festival. We said it would help his esteem, help his road to recovery and good citizenship.  It worked and they granted him a six hour release (day pass).  He showed up to the blues festival in “Blues Brothers” fashion.  In an unmarked cop car, with two armed officers in street clothes and handcuffed.  We did the show and it was great.  By 2001 we were playing San Francisco, Sacramento, Santa Rosa, Casper and anywhere else we could.  In 2008 The Aces entered into the International Blues Challenge.  We’d win the Sacramento Blues society competition as a trio because Dave had a toothache and did not drive to Sacramento two hours before we went on stage.  After winning in Sacramento, we’d get Danny West (of the late 80’s early 90’s SF band Vain fame and all around great guy) to play second guitar with The Aces because Dave did not want to travel. The Aces headed to Memphis TN to compete against 120 other blues band from around the world.  In Memphis, we’d end up being a top 10 finalists and got hate mail from people saying we disrespected the “original Aces” which was Little Walter’s name for his band (though that’s not why I named my band The Aces).

In 2009 The Aces would sign with El Toro Records out of Barcelona Spain and release No One Rides For Free. By this time Dave was back in the band but our best years were behind us.  We’d struggle to get gigs, had personality conflicts and so I decided to put The Aces to rest in 2010.