THE MYSTIC THEATRE - "Dick Dale A Force Of Nature"

We had a small tradition at The Mystic that was extended to a few of our guest performers, just a great way to kick off the show and get the audiences attention. I guess it's only right to mention Dick Dale in this family of performers because in my opinion no one commands the stage like Dick Dale! 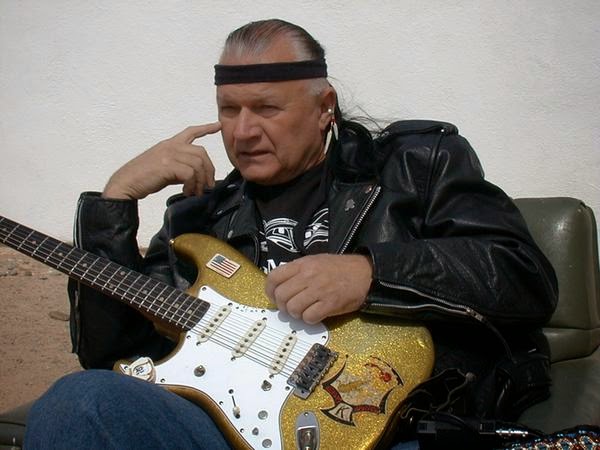 Dick was returning to The Mystic Theatre for another great night of surfed tinged rock& roll. I think that Dick loved to play The Mystic because he found that could fly his plane in and out of the Petaluma airport and it was always just a quick flight back to his home in Palmdale Ca. I have a deep respect for any man that can carve his own future out of his own hands and especially one that can tell Walt Disney Productions to "Go Fuck Themselves" for not renegotiation his licensing fee for the theme ride music to "Space Mountain" at Disneyland, Dick Dale is a man in charge of his own future! I've had the pleasure and the pain of the house mix for years for Dick and the band. It's really more of a love hate relationship because Dick always had a few tricks to keep the house Engineers on their toes. He never traveled with a Band Engineer that I know of and always commanded the complete attention of his guest House Engineers at all times. We'd worked together for years and I only wish I still had my "Dick Head" T-shirt, I'd always said that Dick Dale isn't just a great performer, he is a "force of  nature!"
On one particular show at The Mystic, Dick had his son Jimmy Dale as his guest guitarist. The feeling was that Dick was grooming his son for a career run himself and you could see that he was intensely sincere in that road time college of knowledge. As I mentioned, we had a little tradition for our "Friends of the Mystic"... a stage entrance from the load-in lift at the rear of the stage, this time with a twist for us. If you've been to enough Dick Dale shows you've probably noticed that Dick is rarely introduced, rather he chooses to let his guitar introduce himself. At any given point before he takes the stage you'll hear his wireless Stratocaster guitar come blasting out of his 2 Fender Dual Showman amps and then quickly up in the house system. Earlier that day I had suggested to Dick that we do a swap on the intro that I had suggested and have Jimmy come down on the lift instead to have him kick off the show. He loved the idea as any proud father would and It was the perfect set-up to introduce his son Jimmy to a Mystic Theatre audience.

At 9pm, right after the support had played (typically The Pyronaughts) and we completed the set change, I'd sit at the console and wait for a screaming guitar at roughly 110db to burst into the room and we'd be off and running. Our time came and the set-up worked flawlessly, we hit off all of the house lights except for 1 up-light that I had positioned on the floor near the load-in lift gate and 1 of our fog machines kicking out a light mist just for the effect of sinking into the fog. The audiences attention was turned immediately to the stage as the screaming guitar was heard and the load-in door burst open. Jimmy Dale step through the door in the up-light and stood on the lift and as we slowly brought the lift gate down into the fog. Jimmy looked like he was ripping up the solo until he through his hands in the air and let the audience know that he was not the one really playing at all! We brought the lights up as Dick stepped on stage and tore into one of his classic guitar surf rock songs with Jimmy by his side. The audience screamed like crazy when they realized the trick that had been played on them and he had them on his side for the rest of the show.

Over the years I've mixed quite a few Dick Dales shows... and I've gained some very valuable insights to how to work with him. I've learned no matter how loud his guitar amp is never turn off his vocal mic, even though it's amplifying his already louder than god volume... it's not worth suffering the onslaught of his public comments and ridicule as he scrutinizes your qualifications as a sound engineer when he turns at any given moment to use it and finds it not on. Dicks manner of stage set-up I always thought was brilliant for a 3 piece rock band and I later tried this very same set-up with Jim Thomas and The Mermen. Dick's band would set up in an arch with 2 Fender Dual Showman's (4x12's) on the outside of the stage and the bass player would run 2 Dual Showman's (2x15's) on the inside of the arch, on each side of the drummer. It made perfect sense to me, the kick drum in the direct center of the stage with the bass radiating from each side of the center and the guitar throwing sound around and over the bands stage volume... hell, it actually was a surf wave theory!

On one of the other visit's to The Mystic Theatre Dick pulled off the most amazing guitar solo's that I have ever witnessed, and it wasn't so much as what he played but how he played it. Earlier in the day Dick shared his latest guitar me, it was a Fender Strat with his name ... "Dick Dale" pearl inlaid into the neck of the fret board and as if that wasn't enough it also had a tuner with LED lights that lit up and down the neck to help him tune his guitar to correct pitch. (Jimmy Dale had one just like it!)
That evening as Dick was heading off stage into the crowd and launching one of his extended guitar solo's he did one of the most remarkable things that I've ever seen.

As he strolled through the audience screaming on that wireless Stratocaster, I saw him head up the stairs to the balcony towards me and give me a smirk of a smile and a "watch this" kind of head movement as he headed back down the stairs. I left the house console and followed him down the stairs and through the lobby and out the front door, all the time he was just wailing on his guitar. Some how the band inside was keeping time or at least trying to keep up or maybe it didn't even matter what Dick was playing at some point, but when I saw what he did next it blew my mind. He stood on the curb under the theater marque continuing to play his lengthy solo, held up his hand, hailed a cab and as he continued to play one of the security guards open the cab door and he climbed in. The door was closed the cab drove off around the block and Dick's solo never skipped a beat. I ran back up stairs and found the band still pumping away that back beat and Dick still ripping his solo... The cab pulled up behind the theater and Dick headed back in through the stage door and eventually back on stage to join the band.

I've said it many times and I'll repeat myself self once again Dick Dale is more than just a guitar player he is a force of nature! For the official history of Dick Dale you may follow the link below!