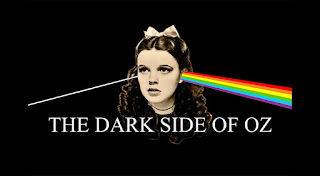 Listen to Randy Teaford for any length of time and you might easily be convinced that it's not just the drugs talking, Teaford - or, as he is known on stage as "The Professor"- is a master of audio visual synchronicity, and his masterpiece is a yearly staging of the dorm room legend "The Dark Side of Oz," this year at Petaluma's Phoenix Theater. Surely you've heard of, or maybe even tried, syncing the audio of Pink Floyd's "Dark Side of The Moon" with the 1939 classic "The Wizard of Oz." But trust us - you haven't seen it done like this!

Teaford has presented his Oz remix for 10 years running, with incremental tweaks and improvements each year. The result is, well, trippy man. For instance, the lyric "balanced on the biggest wave" in "Breath" (in the air) lines up with Dorothy balancing atop a Kansas fence. Latter, the ethereal wailing in "The Great Gig in the Sky" is a perfect backdrop for Dorothy being caught in the twister. And the line "home, home again" (from "Time") plays when Professor Marvel tells Dorothy to - you guessed it - head home.

Teaford's biggest modification to the urban legend, besides the inclusion of all of the dialog from "The Wizard of Oz" mixed into Pink Floyd's score is to interject the 2nd half of "The Wall" midway through the film. (In sync, it takes 2 1/2 repetitions of DSOTM to equal the length of TWOOz.)

"It's like a cosmic wink," he says. There's no way this was ever preconceived; it just happened.
The amazing thing is that someone found it.

The Phoenix Theater, Petaluma California USA - 7pm Door - 8pm educational screening.
It's always FREE for those who are supposed to be there! THE PROFESSOR 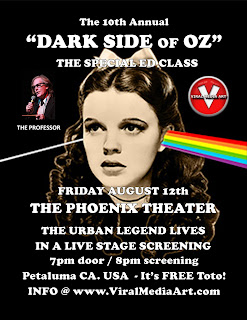