As the Chief Sound Engineer and Production Manager for the Mystic Theatre in Petaluma Ca. I had the opportunity imprint my personality on the venue in the 15 years that I worked there. It's not just about the quality of the sound of the shows there, but it's about the vibe of the room. It's the biggest reason some clubs make it and some don't. A lot of thought and preparation goes into building a concert facilities sound and lighting systems and even more goes into creating and maintaining the venues vibe through the years.

At some point in this article I'll actually get to the various components of the house and stage systems and how they came to be for all the tech geeks out there, but for the moment I want to concentrate on the intangible aspects of the grand old room and it's history since I became involved. 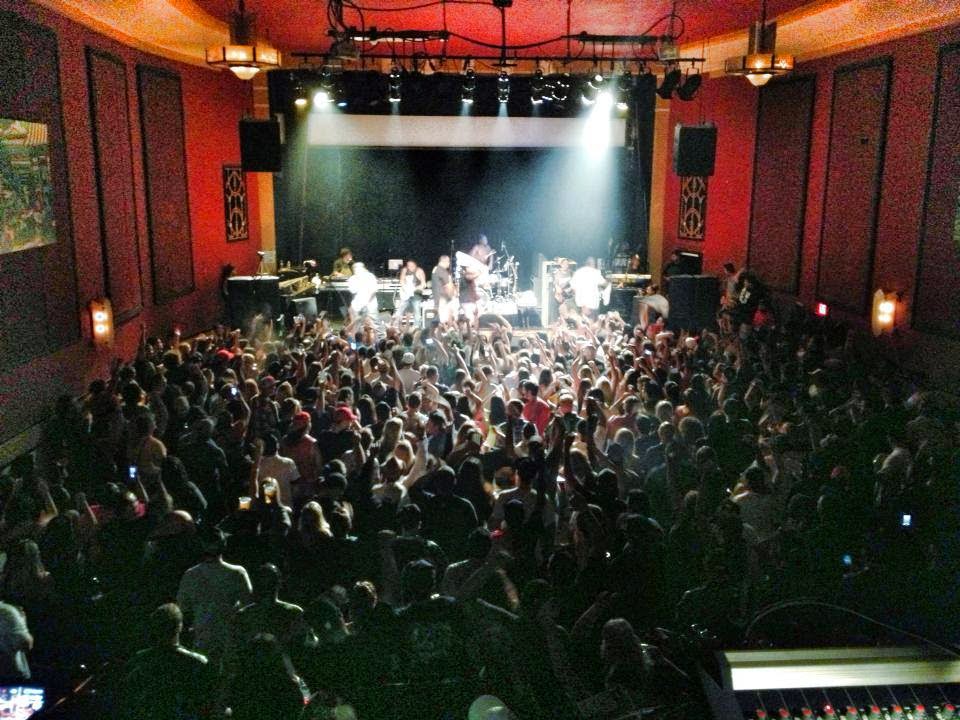 I inherited the room and the Chief Engineer job from Greg Rehberg who had spent a number of years installing the basics of an Apogee sound system with a small Mackie mixing board and trying to get a handle the room. I had been bringing in full concert sound systems for live shows through Phil Salisbury of Sound Expressions in Santa Rosa long before Greg's arrival. I knew what the room was capable of and I also had some system changes in mind that I new would bring it up to the standard that I wanted to maintain local, national and international artists.

We were all sitting around a big table upstairs in McNear's Restaurant and I was in the middle of meeting with Ken, Jeff and a few other Managers at the time in regards to my input and position. I remember listening carefully to everyone to better understand their plan and passion for the room and after everyone had their chance to clarify their business position I took my opportunity to do the same... "You know, there's really only 1 person that I am interested in pleasing when it comes to staging and producing shows"... I said with a very straight sure of myself face. Everyone at the table thought that it was going to be them, the owners, the managers... "The only personal that I'm really interested in pleasing is the bands Tour Engineer."

My theory was pretty straight forward and an equation that was hard to argue with. As a band Tour Engineer for many years already, I understood the value of the House Engineer position. In my opinion the House Sound Engineer should be a friendly and competent Engineer with at least 1 gray hair capable of tearing apart and rebuilding the house and monitor system at any given point of his day or night. He or she is the 1st one to greet you and typically the last one to wave goodbye. The House Engineer should make all of the incoming Tour Engineers comfortable interfacing their acts with the house system and have a good time doing it. In turn, The Tour Engineers will see that their event is going to be not only technically fine but they are going to have some fun as well. A happy Tour Engineer on stage and in the house means a happy band on stage, the happier the band the better the performance, the better performance the more people return to share in that good time!

P.S. To keep your House Engineer happy give him the best tools affordable
and give them dinner and a drink for gods sake! 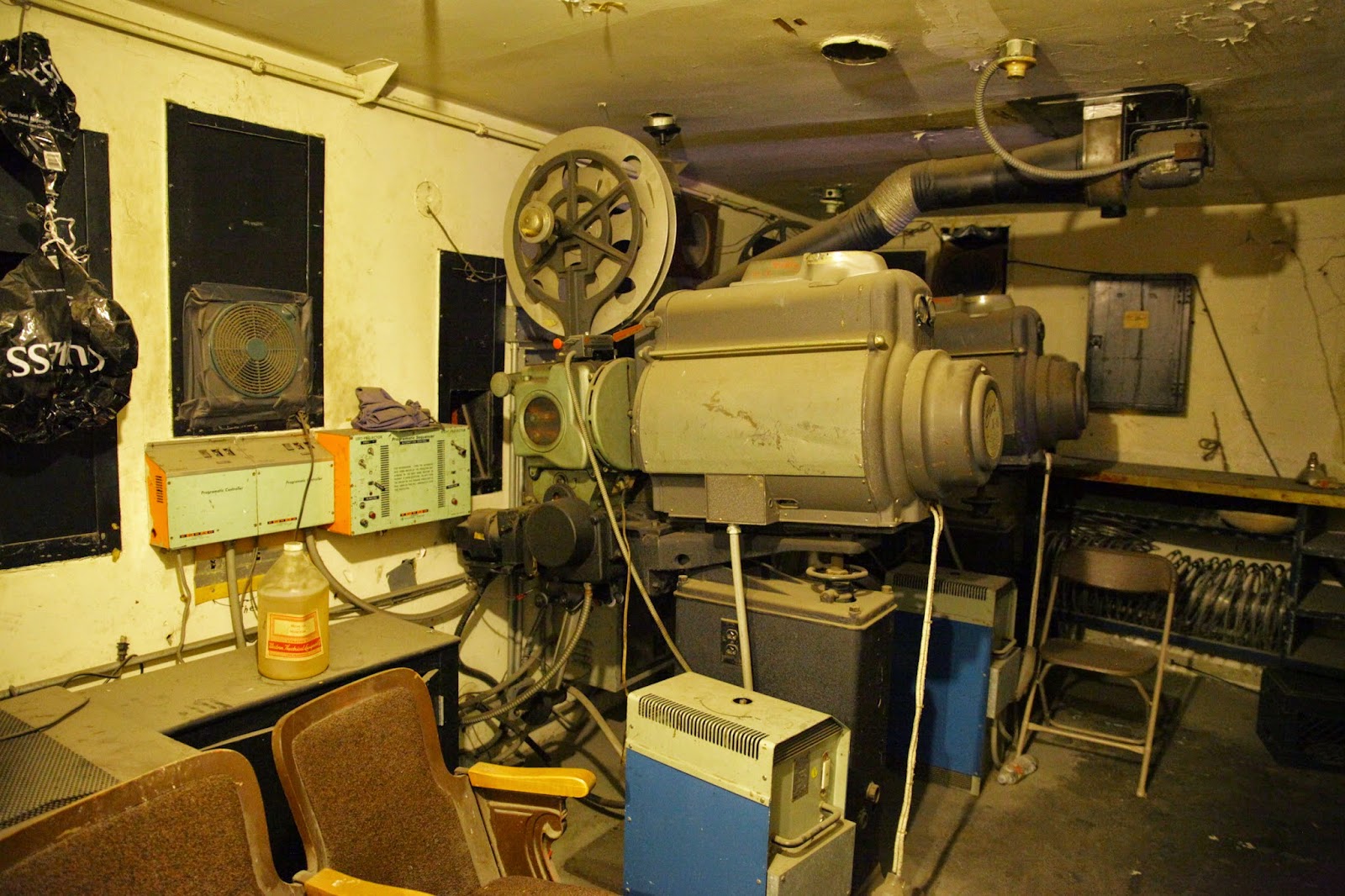 It was very late after a show one evening, somewhere around the time that I began working full time at The Mystic. I was walking around the theater in the dark turning off the systems and the last of the lights when I noticed that the projection room's door was unlocked and slightly open. I need to say that in all of my time at The Mystic I have never felt any presence of being or spirit in the theater and I have had those kind of experiences before. One of the long time staff member, Ryan recalls his sightings of a rather old Italian Man in a suit sitting in the seats well after the doors were locked and we were closed, but I've never personally met a spirit there.


This is however the closest that I have come to shaking hands with the rooms spirit.

As I pushed open the door into the darkness, I placed my left hand on the wall looking for the light switch. A really cool chill came over me as I rested my left hand on the wall and turned on the lights with my right hand. My left hand felt like it sunk into the wall and once I turned on the light I saw that my hand was sitting in an imprint of someone else's hand print! I was startled at first, but when I realized what had actually happened, I began to feel that it was more of a welcoming handshake... the magic had been passed on! 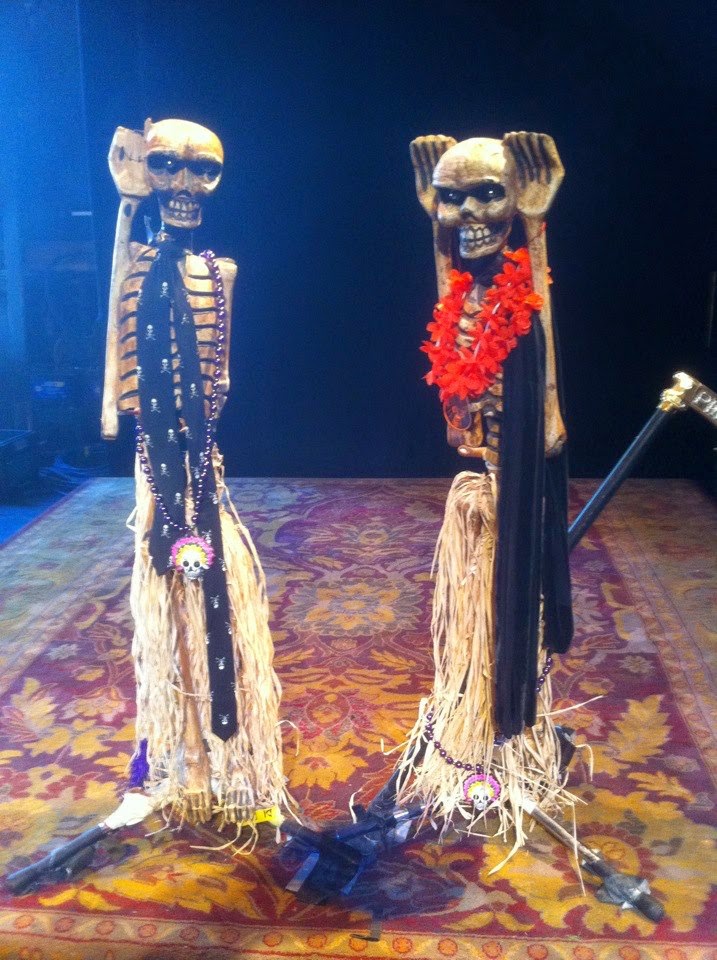 The story of Skinny & Slim


Shortly after my arrival at the Mystic Theatre I stumbled across my house muse or guardians.

The 1st on the seen was Skinny, a wood skeleton stick figure that I propped up on a guitar stand (above on the left.) One of his hands is appropriately at his ear listening and the other on his crotch... we're not to sure why! One of Skinny's first appearances on stage was standing next to Dr. John's (Mack -----) piano during a show. Mack was so impressed by Skinny that he signed him on that hand that covers the crotch and sealed his fate as our stage mascot. Skinny lived at the top of the stage stairs and never moved unless a performer moved him themselves. It was his presence and invitation to participate that was the key to unlocking some truly great shows in that room.

Skinny has stood on stage in place of missing band members... He's filled in for sax front-man Martine Fiero from the band Zero after he passed away just before an upcoming show and he has stood next to countless drummers and keyboard players. The image of Skinny standing by Johnny Winter side while he was seated playing a show was fearless! It seemed after every show I would find him on one side of the stage or the other and frequently on top of some gear behind stage if he was hiding! Once after a show, one of our security guys even found him in the men's room upstairs, he had been mugged and left for toothpicks. I patched him back up and reinstated him in his honorary position side stage, but clearly Skinny was in need of some help and not just from me but someone from his own tribe.


Unlike Skinny it took Slim years to find his way to the stage... his resurrection happened like this.

After a show one night we thought that we would all go over to McNears and have a last call drink, we had worked hard and just wanted to unwind. As we were all sitting there in a booth enjoying our drinks and talking my eyes wander up the wall and there hanging on a hook 10' above us I spotted him, he had both of his wood hands help up to his ears... it was Skinny's long lost brother. Maybe it was the drinks or the time of day but the only thought that came to mind was lets get him down from there! We looked at each other and quickly realized that if we were to succeed and not piss off the boss, we needed to send a member of the O'Donnell clan up there to rescue Skinny's brother. Travis O'Donnell, one of my best young Monitor Engineers and the nephew of owner Ken O'Donnell quickly volunteered and In a blink of an eye leapt up on the back of the booth where we were seated and released our new friend from his bondage. Within 10 minutes Slim had a new home on a guitar stand of his own and in the only one logical room position left for him to take. We placed Skinny house right and Slim on house left on each of the speaker stacks boldly looking down over the audience from above the stage.

Skinny & Slims costumes changed as the years and shows went by, they became a place to put lost articles of jewelry and accessories. All of the jam bands loved the Skeleton vibe reminiscent of the Grateful Dead era and I would  occasionally point our front PAR can lights onto the boys with a dark blue gel just to be able to pull their presence up in the room or sometimes green for our reggae shows. On one of our Halloween shows I modified Skinny & Slim's persona by drilling holes
where their eyes were and installing 2 pin spot lasers that I could turn on during the show, unfortunately they weren't very cost effective to use on a regular basis.

The boys are no longer at their post at The Mystic and may have even retired much like myself, but they were a very special presence for me and a lot of people who have attended the shows over the years... two friendly benevolent spirits that always had the best interest of me and the theater at heart.